Join us for our gatherings
Go to Sunday Service

Join us in the sanctuary every Sunday at 10:00 AM for worship.

Join us in the Parlor off of Brown Hall every Wednesday from 1:30 PM to 3:00 PM for a Bible Study.

Sunday School in held at 10 AM on Sundays during the school year. Sunday School starts again on September 11th, 2016.

Come to Brown Hall once a month for our bean dinners during the summer.

A land grant establishing the town of Bucks Town (later to become Bucksport) mandated the community provide for a church. In 1793, the Town voted to raise eighteen pounds to support the gospel, and pastors from the Massachusetts Missionary Society preached on an irregular basis. In 1803, Reverend Mighill Blood was called to serve as the first minister at an annual salary of $300 and served the Congregational Church from 1803 to 1840. He first preached in private homes, and in 1814 the first meeting place was built on Oak Hill in Bucksport. In 1818, the Sunday school was formed because the parents felt their children needed moral and religious education.

In 1838, the present house of worship was built on Elm Street as it was felt this was a better location. The committee paid eight dollars per rod for the seventy rods on the corner lot, and the selling of shares helped finance the building. In 1863, alterations were made to the sanctuary to accommodate the Hooke organ. The original bell cracked during the celebration marking the end of the Civil War, and a new bell was placed in the belfry in 1867. The present vestry was built in 1876.

The corporate seal was designed November 23, 1915 and included two concentric circles with the motto “Send Out the Light” and a lighthouse spreading rays. The church constitution was adopted February 28, 1916, and its articles of incorporation were received May 19, 1916.

Many clubs and organizations were formed to better the church and the community. Celebrations were held to honor the 100th, 125th, 150th, 175th, and 200th anniversaries of the church. The 200th celebration was lasted for a year and included the start of our Memorial Garden. Other recent memorable events included the remodeling of the church basement in 1960, and the sanctuary renovation in 1962. An addition to the vestry was built in 1977-78, and the church was listed in the National Register of Historic Places in 1990. The steeple was replaced in 1993, and a third bell was installed in 1994 due to an irreparable crack in the previous one. 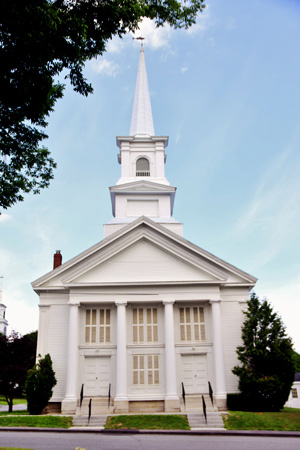 Administrative Assistant
Nancy has charge of the scheduling, phones, and general office tasks that keep the church functional from day to day.

Letters from the Members

I was baptized at Elm Street Congregational Church as an infant. My parents had been married at our church over 58 years ago by Rev. Charles Brown. I attended Sunday School, Confirmation and Pilgrim Fellowship with many other children growing up here in Bucksport. My wedding took place here and my son was baptized and confirmed here. The people in the congregation are family and truly care for one another in good times and times of need.
Lori Hunt
I go to church for the following reasons:
•To worship and praise the Father, Son and Holy Spirit.
•To give and receive Christian fellowship. Even as we love our neighbors, we are to love our brothers and sisters in the faith more.
•Give monetary support to the Elm Street Church to support its Sunday School and community outreach. To help maintain a Bible based church of worship and comfort in Bucksport. Honor those Christians who have gone before.
•Focus on Sabbath/Sunday to reflect on God and His many blessings. A day of rest from the week’s routine.
•To listen to a thoughtful sermon and sing praises.
• Take communion.
•Because it makes me happy, fills a need and gives me peace; I love scripture.
Rod Terry

My family wen to church every Sunday. So I attended church every Sunday at an early age. This has always been a part of my life and is very important to me now. The weeks wouldn’t seem right without going to church. I married into a family of church goers. Church attendance seems to balance your days of the week. Also, the interaction with other worshipers stimulates and gives you a good outlook for every day.
Jeannette S. Blodget